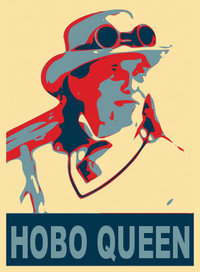 To Sleep or not to sleep that is the question…

Dragon Con is the only time of the year when I could go a full day without sleeping. There is so much to do and I have been involved or participated in programming that runs late in the evening or early in the wee hours.

Last year I made the mistake of catching some sleep after the film fest, which ended earlier than previous years. As a result, I woke up later than usual and stumbled to a great panel of my friend Leigh interviewing Leonard Nemoy. Instead of going to bed, I should have made my way to the Sheraton to catch Brit Track’s Rob with the Hat all night extravaganza (this man never sleeps). In hind site, I knew I had an early start and should have just stayed up.

If you are of the insomniac kind, Dragon Con there has all sorts of night activities. The drum circle goes on very late as well as DJs and concerts. Some of the best music acts don’t start playing until 12 or 1 am. Wander into the gaming area and I am certain you can pick up a game to play with other non sleepers.

The last time I checked, there are designated party floors in the Hyatt. Some of these parties are invite only and and others will place flyers up throughout the con. One such party is the Thursday night Fez Party (wearing a fez is required). Please note that hosts will card you to make sure everyone is legal age. I attended a Dead Pope party one year a friend was hosting and they made sure to have someone be security and they carded. Be respectful of your hosts and the hotel. Do not act like a jerk. If you plan on attending, let someone know or go with others and bring ID.

There is the bars that are popular as well. Velocity in the Marriott has taken a lot of the patron load from the Hyatt as there is more floor space. The public bathrooms are better there, just ask Dana Snyder. Prices for drinks are about the same. The Hyatt does bring out booths and tables to sell a quick burger and drinks. Trader Vics has a great bar serving Mai Ties, though I like the Navy Grog drink. Please note that the bars do close earlier on Saturday night.

I have to recall one instance where I was trying to get some sleep but my noisy neighbors would not allow that to happen. From a dead sleep my drunken neighbors woke me because they could not find their room. This was in the radius, a cylindrical tower in the Hyatt, and it was not hard to find. So I was deprived of sleep I could easily watch great Dragon TV but I got dressed and ventured next door. I knocked on their door. The people inside asked who it was. I said it is your neighbor. They sheepishly opened the door and started to apologize. I said never mind that, what do you have to drink. That broke the ice. This room however was meant to hold only two people. There were six in this room due to over booking. We found places to sit then all chatted and hung out for a bit. The problem was these were people who did not know how to drink. They bought crap booze and most were switching their drinks from beer to a mixed drink. Some started to get sick and that is something I did not want to deal with. I left them knowing all will be in pain the next day. I went on walk about through the hotel and caught up with some folks I know then I ventured into Brit Track and watched Terry Pratchett’s Hogfather. Awesome.

Please note. If find yourself falling a sleep in a video room by mistake. The con sends out the sleep enforcers at random times during the night to clear the rooms of sleepers. These folks are part of Dragon Con security making sure no one is sleeping in the hotels conference rooms. If you find yourself falling asleep, please go back to your room.

If you are a sleeper. I did find that the Radius (without drunk neighbors) and the International tower quiet enough to get good rest. The atrium in the Hyatt the rooms that face into the lobby reverberates much of the noise from the lobby and the lower floors. It is not until 4 am that it gets quiet. This is even when you have floor higher up. Of course the higher up you go the harder it is to get an elevator. The Marriott has some noise canceling walls or some other magic as I slept soundly the one year I was in that hotel and the room’s doors face into the lobby as well. Last year, I ended up at the Hilton and it was a pleasant surprise. The rooms radiate from the main lobby into hallways. My room had a view of the jogging track and tennis courts. I could not tell there was a convention going on, the rooms are that quiet. I know on good authority that the Sheraton has some great rooms.

There you have it, options to sleep or not to sleep.